Corvin Castle, also known as Hunyadi Castle or Hunedoara Castle, is a Gothic-Renaissance castle in Hunedoara, in Romania. It is one of the largest castles in Europe and figures in a top of seven wonders of Romania. As one of the most important properties of John Hunyadi, the castle was transformed during his reign. It became a sumptuous home, not only a strategically enforced point. With the passing of the years, the masters of the castle had modified its look, adding towers, halls and guest rooms. The gallery and the keep - the last defense tower (called "Neboisa" which means "Not afraid" in Serbian language), which remained unchanged from John Hunyadi's time, and the Capistrano Tower (named after the saint, Franciscan monk from the Battle of Belgrade in 1456) are some of the most significant parts of the construction. 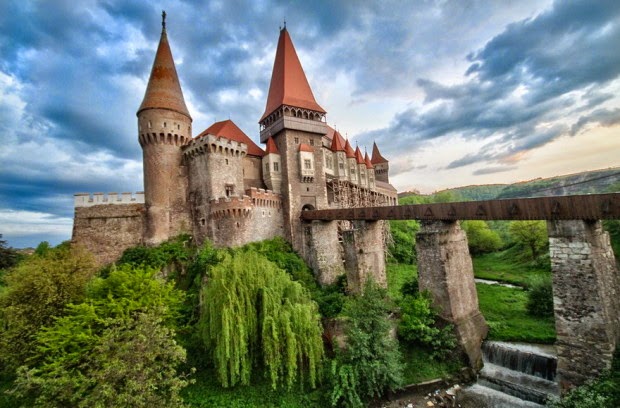 Other significant parts of the building are the Knights' Hall (a great reception hall), the Club Tower, the White bastion, which served as a food storage room, and the Diet Hall, on whose walls medallions are painted (among them there are the portraits of Matei Basarab, ruler from Wallachia, and Vasile Lupu, ruler of Moldavia). In the wing of the castle called the Mantle, a painting can be seen which portrays the legend of the raven from which the name of the descendants of John Hunyadi, Corvinus came.

Tourists are told that it was the place where Vlad III of Wallachia (commonly known as Vlad the Impaler) was held prisoner by John Hunyadi, Hungary's military leader and regent during the King's minority, for 7 years after Vlad was deposed in 1462. Later, Vlad III entered a political alliance with John Hunyadi, although the latter was responsible for the execution of his father, Vlad II Dracul.. Because of these links, the Hunedora Castle is sometimes mentioned as a source of inspiration for Bram Stoker's Castle Dracula. In fact, Stoker neither knew about Vlad's alliance with Hunyadi, nor about Hunyadi's castle. Instead, Stoker's own handwritten research notes confirm that the novelist imagined the Castle Dracula to be situated on an empty top in the Transylvanian Călimani Mountains near the former border with Moldavia. In the castle yard, near the 15th-century chapel, there is a well 30 meters deep. According to the legend, this fountain was dug by twelve Turkish prisoners to whom liberty was promised if they reached water. After 15 years they completed the well, but their captors did not keep their promise. It is said that the inscription on a wall of the well means "you have water, but not soul". Specialists, however, have translated the inscription as "he who wrote this inscription is Hasan, who lives as slave of the giaours, in the fortress near the church". In February 2007, Corvin Castle played host to the British paranormal television program Most Haunted Live! for a three-night live investigation into the spirits reported to be haunting the castle. Results were inconclusive.